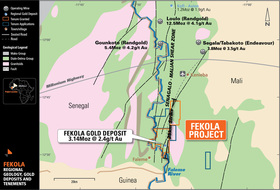 Papillon’s work program at Fekola is aimed at fast tracking the appraisal and exploration of the widespread gold mineralisation identified within the Project area to enable the Company to fulfil its strategic objective of becoming a Western African gold producer in the near-term.

A comprehensive Scoping Study was completed on Fekola in October 2012.

Utilising the current Mineral Resource Estimate (‘MRE’) of 40.1 million tonnes of ore at an average grade of 2.4 g/t for a contained 3.14 million ounces of gold as a base case scenario, the Project can support an average annual production profile of 231,000 ounces of gold over a minimum eleven year mine life. There is strong potential to increase the production profile and mine life with ongoing exploration work.

Fekola Project Mineral Resource Estimate – July 2012
Notes: The resource is reported at a lower cut-off grade of 1.0 g/t gold
The resource is estimated on a 100% basis of which 90% is attributable to Papillon Resources Limited
All figures are rounded to reflect appropriate levels of confidence. Apparent differences occur due to rounding

The mining schedule is expected to be conducted over a period of 11 years, including an initial 2.7 million tonne pre-strip. At its peak, the mining schedule contemplates the movement of 16 million tonnes per annum (both waste and ore).
Strip ratios for the Project are low, with the average LOM strip ratio being 1:1.9 (ore to waste). The mining schedule has been limited to four 10m benches per year, with a maximum vertical descent of 40m per annum.
At this early stage, the Company has not contemplated any mining optimization, stockpiling of lower grade material, nor the use of a run of mine (‘ROM’) stockpile to blend ore to the mill. These may be contemplated as part of the Pre-Feasibility Study, which has commenced. 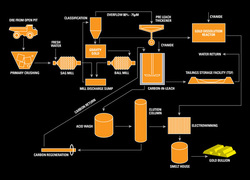 The Company has completed extensive batch metallurgical test work on a 1.5 tonne representative bulk sample from the Fekola deposit. The comprehensive program addressed all key components including gravity recoveries, leach recoveries at different grind sizes and comminution. The test work program, which formed an integral part of the Scoping Study, produced the following key results:

The favourable metallurgical test work results indicate that a simple well understood processing circuit, including Gravity Recoverable Gold (‘GRG’) by Gravity Concentration and a conventional Carbon in Leach (‘CIL’) process are best suited to the Project. The initial conceptual process flow sheet is shown below.
Further work will be completed to refine the conceptual process flow sheet and this will ultimately be followed-up with further metallurgical test work campaigns.

The total installed power requirements for the Project are estimated at 24MW. Power will be generated on site with heavy fuel oil (‘HFO’) generators at an estimated cost of US$0.22 per kilowatt hour excluding capital. A trade-off between HFO and diesel was undertaken and identified HFO generators as the preferred option for power production.
Regional road infrastructure has improved significantly since the construction of a multi-lane, tar sealed Millennium Highway. The highway extends from the port city of Dakar in Senegal to Bamako and is a major supply route for the landlocked country of Mali. The highway passes within 45km of the Project area. The remaining access is not suitable for heavy vehicles and requires upgrading prior to the start of construction. Some of this upgrade work has already commenced, including the construction of culverts and bridges over seasonal waterways to allow year round access to the site.
Water is available from the Faleme River, a major water course with significant year round water flows, which is in close proximity to the Project (within 2km).

The initial capital cost estimates for the mine, process plant and associated infrastructure is estimated at US$298 million. This cost includes all associated project infrastructure and indirect costs of US$40 million to cover spares, first fills and working capital. No allowance has been made for the acquisition of initial mining fleet (included in operating costs), as it is envisaged that this activity will be outsourced to a specialist mining contractor. The engineering studies conducted to date, to support a capital cost estimate for the Project, allow for a level of accuracy of nominally ±30% (AACEI Level 5).

The average LOM operating cost has been estimated at US$596 per ounce of gold produced. This cost estimate is based on the treatment of approximately 4 million tonnes of ore per annum, producing an average 231,000 ounces per annum over the LOM.
The operating costs were estimated in conjunction with the scoping study process design criteria, block flow diagram, mechanical equipment lists, metallurgical test work results for reagents and in-country labour cost data and reagent and fuel supply prices. Operating costs are defined as the direct operating costs including contract mining, processing, tailings storage, water treatment and general and administration.

The Company is continuing to focus significant resources and attention on the critical work stream associated with the ESIA. This study includes base line environmental studies, environmental monitoring activities and community engagement initiatives and documentation.
The work for the ESIA has run concurrently with the Scoping Study and will continue to run in parallel with the Pre-Feasibility Study. The ESIA will form an integral part of the Company’s application for a mining permit (‘Permis D’Exploitaition’), which is anticipated to be submitted mid 2013.
The ESIA includes, but not be limited to, the following key items: 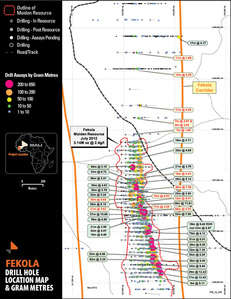 Drill Hole Location Map & Gram Metres
Following completion of the Scoping Study, the Company has commenced the PFS for Fekola, which is scheduled for completion in the second quarter of 2013. During the PFS phase, the Company will undertake a more detailed metallurgical test program and further mine scheduling, geotechnical, project infrastructure and power studies aimed at identifying opportunities to further enhance the Project economics through capital and operating cost reductions. An extensive drilling campaign will be undertaken concurrently with the PFS.
The drilling completed at Fekola to-date extends over a strike length of approximately 2km, which represents a small portion of the strike extent of the highly prospective Fekola Corridor, and extends to a maximum vertical depth of 260m. Mineralisation remains open at depth and along strike to both the north and south. The next drilling campaign, scheduled to commence in mid November 2012 and include in the order of 100,000m, will be focussed on upgrading the resource classification and expanding the current MRE, as well as testing priority targets along the Fekola Corridor. An increase in the overall resource base will facilitate future expansion in production rates and the contemplation of a longer mine life for the Project.
The rapid progression to a PFS will further de-risk the Project and move the Company closer to its stated goal, of being a West African gold producer in the near term.

There are many benefits to using a local finance broker for your business funding. Often they have access to solutions that most people dont. Our advise is to use an expert in this field.
Website by SEO Melbourne